Nick's extensive transport experience ranges across rail, retail, aviation and bridge projects at all stages, from feasibility studies and concept design to detailed design, construction information and site support for both clients and contractors.

The viaducts are being designed by a Design Joint Venture of Mott MacDonald and Systra and architects Weston Williamson + Partners, all working for HS2’s civils contractor Balfour Beatty VINCI joint venture.

David Speight, Client Project Director at HS2 Ltd said: “We are very pleased that Birmingham City Council’s planning committee approved the plans for these viaducts. This decision represents a significant approval for HS2 in Birmingham city centre and means we are on track to bring high speed rail to the West Midlands, increasing capacity and connectivity across the UK. In addition, our design refinements on the viaducts will bring a range of extra benefits, including reducing the construction time and materials, reducing the amount of carbon we need on the project.”

Nick McGough, Director at Weston Williamson + Partners said: “The key design challenge of Curzon 3 was to address varied sites with differing technical requirements whilst providing both a level of consistency and ensuring the viaduct contributes positively to its surroundings. Toward the HS2 Curzon Street Station the viaduct is over 60m wide and so the design maximises daylight under the structure through the introduction of light slots with a unique lightweight parapet design. Over the Digbeth Canal the opportunity is taken to reference Birmingham’s canalside heritage whilst the large span required over Lawley Middleway is achieved through the use of heroic weathering steel girders which arch over the carriageway. This has only been possible through the close collaboration between architect, engineer, and construction team and Birmingham City Council’s support of the result is testament that this 21st Century structure will contribute positively to the local community and allow for unique spaces that will add to the life of the city.”

The Curzon Viaduct No.3 is approximately 300 metres long, the height above ground level varies between 5 metres to 6 metres, it is 65 metres wide at the widest point and will be supported by 30 piers. The driving ambition for the design has been to maximise the opportunities to create usable and flexible public spaces under the structure. V-piers have been developed which reduce the footprint at ground level with their form articulated to reduce their perceived visual mass.

As the viaduct crosses over Lawley Middleway, the V-piers are rotated to reduce the span of the three variable height girders whilst maintaining the V form ethos. Due to differing requirements along the length of the viaduct it is the consistency of the parapet and piers that unify the structure.

As Curzon Street No.3 Viaduct crosses the Digbeth Canal, the concrete V piers are substituted with four inverted steel piers which reference the heritage of canal-side cranes in Birmingham. This also means the Digbeth Canal area will remain a visually attractive area to the public, combining the twenty first century HS2 infrastructure and the nineteenth century Digbeth Canal area, ensuring a positive legacy for this part of the city.

Through the development of the designs, the width of the viaduct has been reduced from 71 metres to 65 metres. The Curzon Street Pumping Station that was previously located south of the viaduct has been removed from the design as water that gathers on the viaduct will now be drained into either an attenuation pond - an area on the ground that temporarily stores excess water before releasing it in a controlled way, or attenuation tank located underground.

A number of design refinements have resulted in a shorter construction programme and less concrete needed to build the viaduct, bringing positive environmental and community benefits. 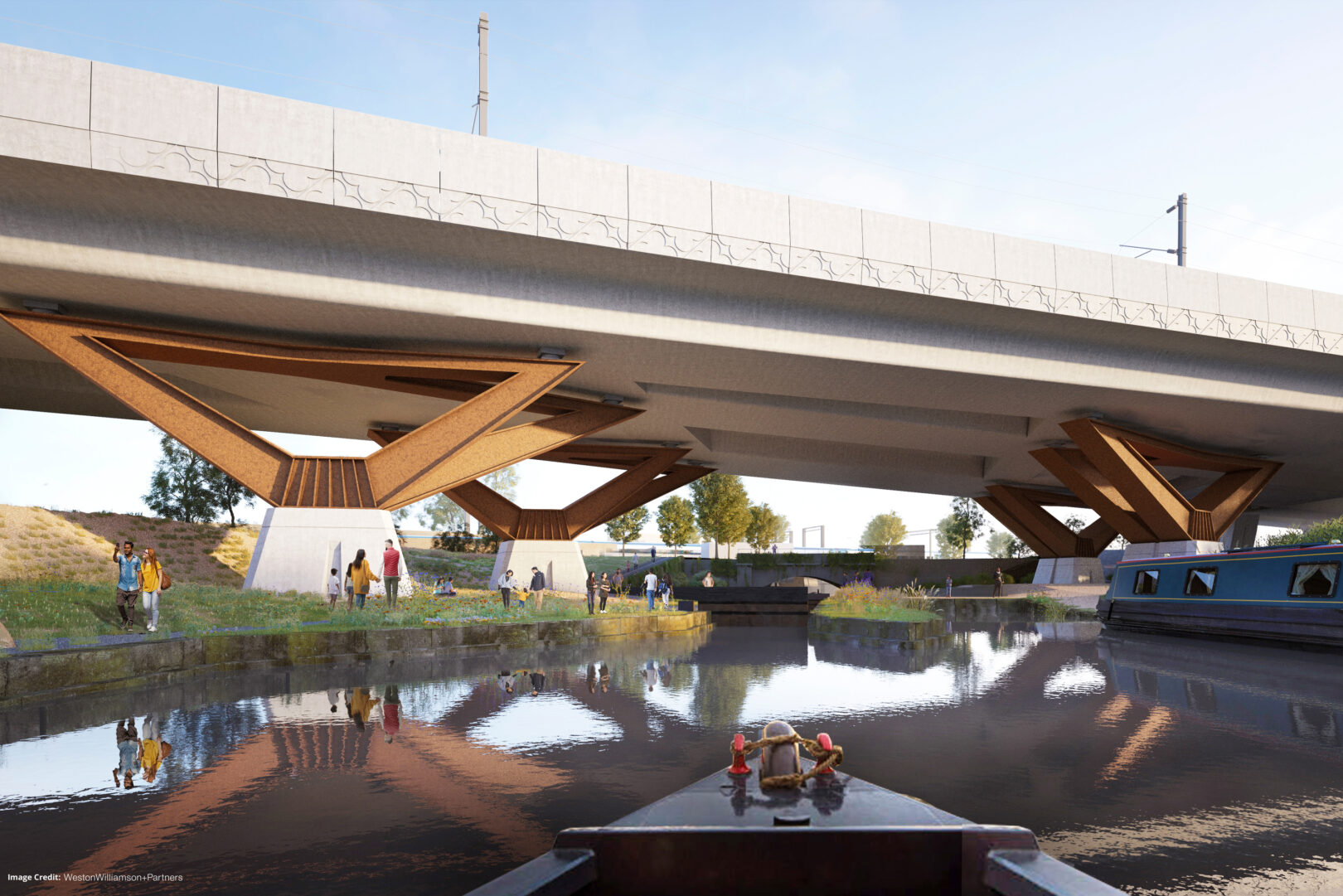 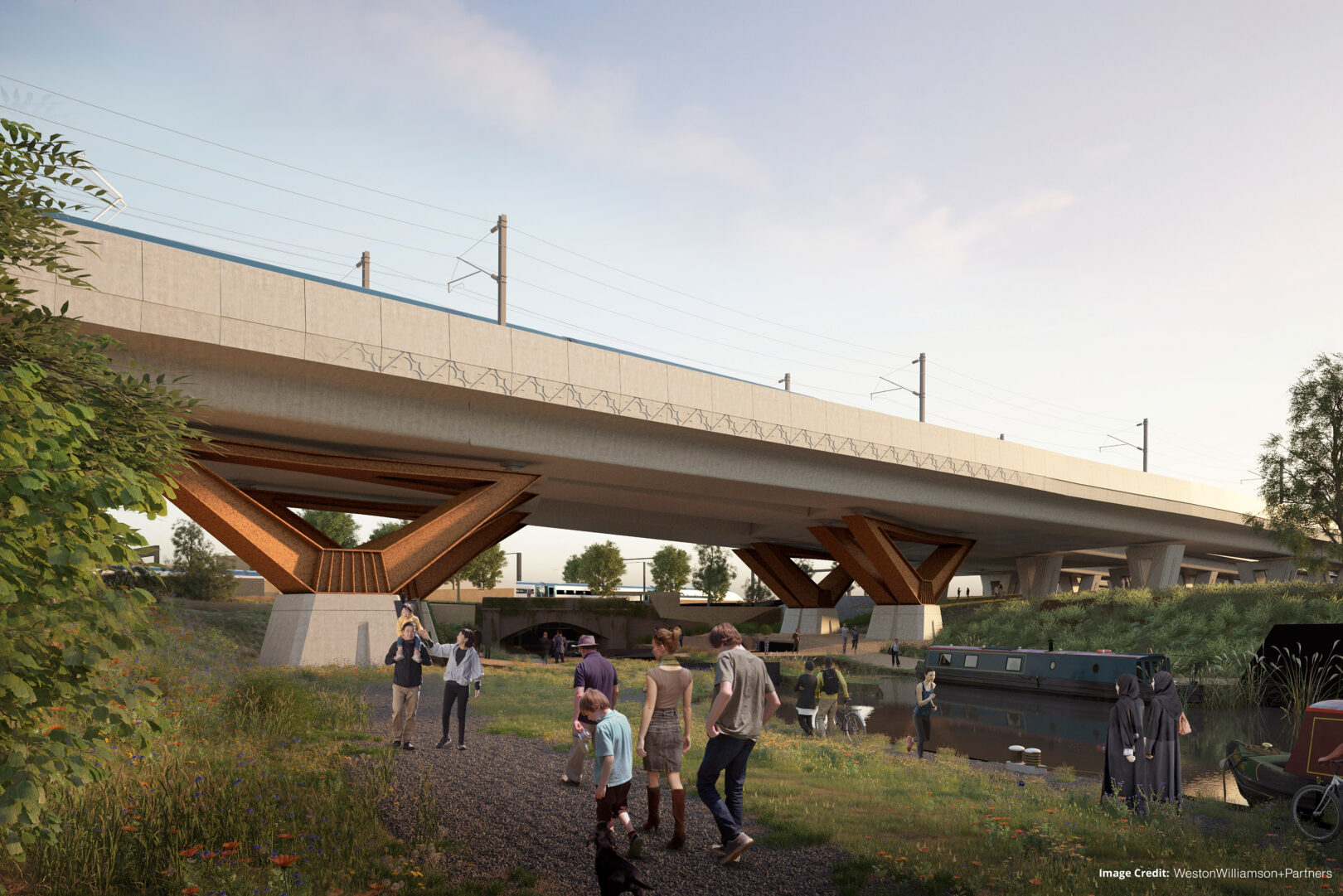 Nick's extensive transport experience ranges across rail, retail, aviation and bridge projects at all stages, from feasibility studies and concept design to detailed design, construction information and site support for both clients and contractors.

Everyone at Weston Williamson + Partners is extremely proud to see our two Elizabeth Line stations at Paddington and Woolwich opening to the public. It has been a privilege to be part of London’s largest infrastructure project in decades, and it will be fascinating to see how these hugely significant projects are received by passengers and the general public to whom they now belong.

Transport for London (TfL) is searching for a joint-venture partner to help develop three commercial office schemes above its stations at Bank, Paddington and Southwark.