We use cookies to ensure that we give you the best experience on our website. If you continue we assume that you consent to receive all cookies on all Weston Williamson websites.

The most popular bus stop typology in suburban Melbourne is a sign post. The demand for parking  often results in buses stopping in traffic lanes, making vehicle and cyclist navigation dangerous, and leaving passengers disembarking into the road.

The buses are also frequently late. To wait for a bus, with no idea of it’s arrival time, without a seat or shade, makes it a much more unpopular choice of public transport.

My proposal is to improve bus stops for everyone; pedestrians, passengers, cyclists and motorists. A bus stop ‘island’ will give a safe space for waiting passengers, allowing the bus to pull-in, and traffic to continue unhindered. The bus stop will provide shelter and a seat, as well as a live update timetable to indicate any changes in departures. Buses have the potential to offer an incredibly accessible means of transport, due to their proximity to the pavement, width and lower floors, compared to the majority of trams. To encourage this, a bus call system could be utilised, allowing those with reduced mobility to stop a bus  simply by pushing a button, without needing to stand out and hail it. Bike racks could encourage a mixed modal commute, especially on busier bus routes.

I discussed my proposal with traffic engineers, Amber. They provided some useful insights, and highlighted that consideration for the user groups of the cycle lane would be of particular importance to the success of the bus island. In the proposed scenario, cyclists would navigate around the rear of the bus island, parallel to the pavement. This introduces a chicane in the route, reducing speed and potentially deterring more experienced cyclists. We therefore discussed how the bus island cycle routes would connect into a wider cycle network, with prioritised bike signalling. This would see cyclists face less red traffic lights, offering a speedier route and reducing the inconvenience of the odd chicane.

The cycle route would help encourage cyclists who do not feel as safe on the roads, whilst also providing a prioritised route for those who do. The London cycle Superhighway, on Whitechapel Road, is a great working example of this type of intervention. It gives cyclists priority, without needing to negotiate stopping buses or traffic. It is popular with cyclists as it offers speed, convenience and a more direct route.

Designated resident parking could be moved from kerb-side to avoid cars blocking cycle lanes or pavements, reducing the ‘dooring’ risk to cyclists, whilst allowing for more road side green spaces and trees. Pedestrians would find themselves safely protected from road traffic by parked cars and green spaces, whilst cyclists would be unhindered by stopping buses and parked obstructions. The flow of traffic would be more consistent, and bus passengers would experience a safer and more accessible transport system.

The existing typology in Melbourne can be contributed to years of car focused development policy and the bus stop sign post, a product of a standard, low maintenance design. A shift in attitude is occurring and with it comes an opportunity to develop more user friendly bus stops. Change will come through conversations between Vic roads, PTV and local councils, however, I believe it could go a long way to improve safety, enjoyment and accessibility. A bus stop for everyone. 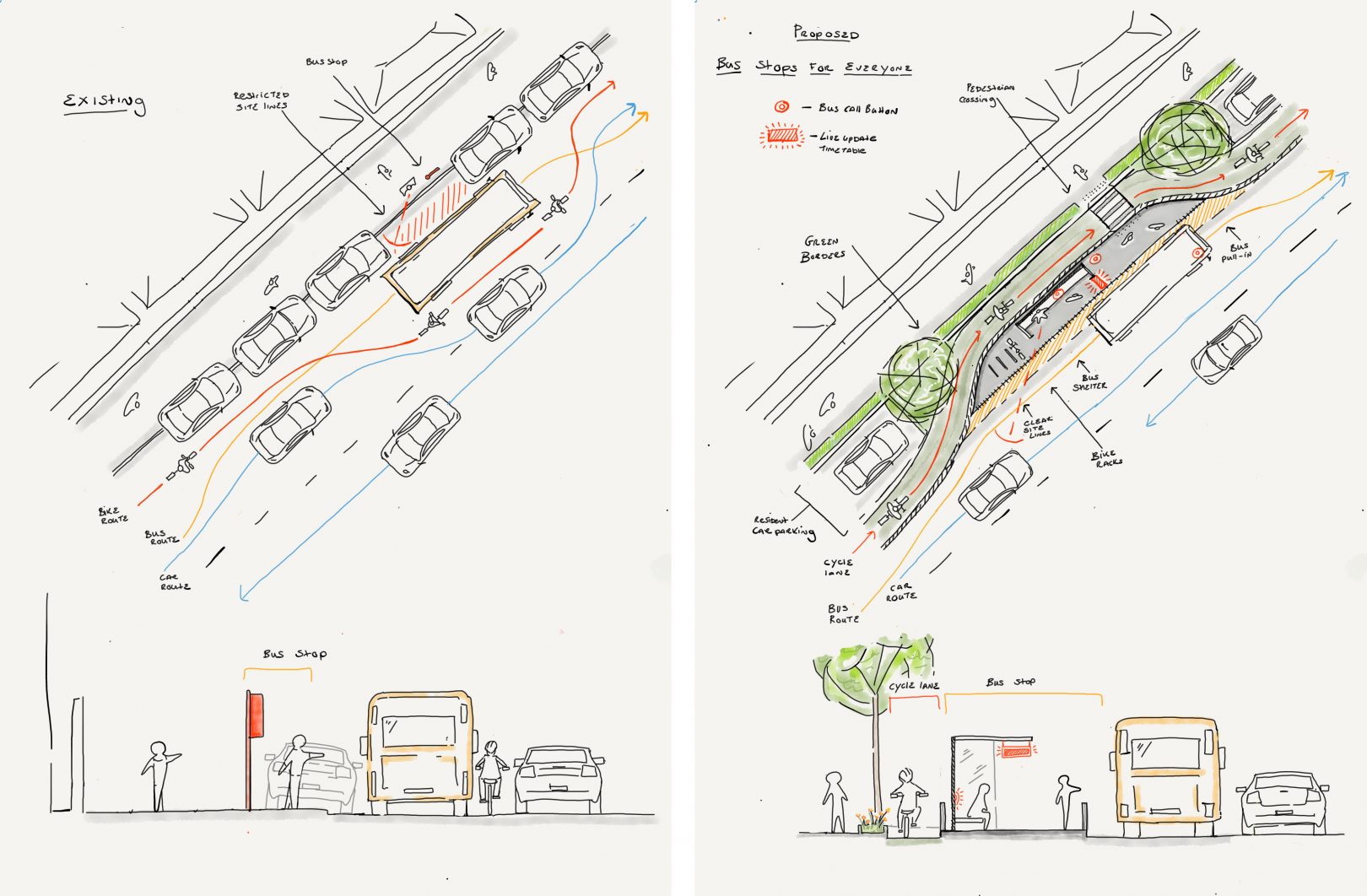 The prototype for 29 freestanding totem signs has been unveiled outside Shudehill Interchange in Manchester city centre. The project is led and managed by WW+P and designed in collaboration with Spaceagency.